SIGN IN
SIGN UP
Current market price
Buy the token that funds small business loans
LEARN THE MOST SUCCESSFUL WAYS to make money with crypto
SMARTFI, THE OFFICIAL CRYPTOCURRENCY PLATFORM OF SUPERCROSS USA
$1 billion+ in loans and transactions
Newsroom
»
Blogs
»
Why You Should Be Holding Not Trading Crypto

Why You Should Be Holding Not Trading Crypto 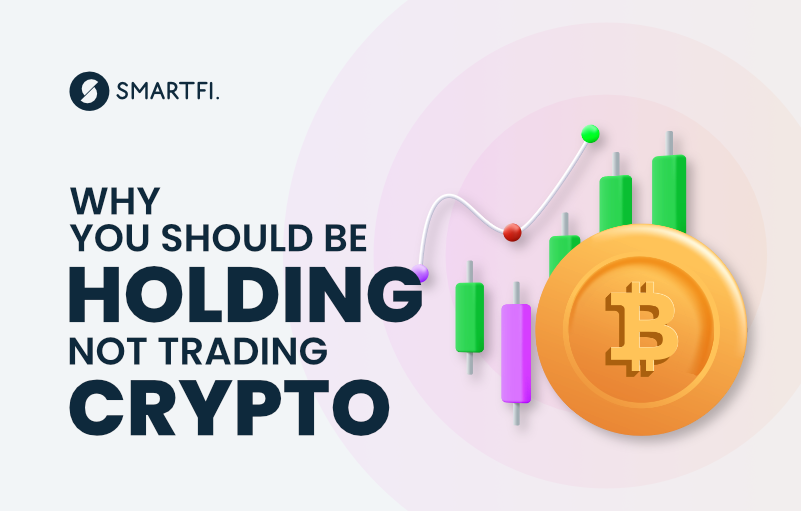 If you are interested in crypto but reluctant to get involved because you know little or nothing about trading, you are not alone. In my role as Head of Research at SmartFI and as a daily contributor to Nasdaq.com, I hear from people like you frequently. The good news is that I also talk to a lot of people who have made a lot of money in crypto, and most of them weren’t traders. They simply saw the potential value in an asset, bought it over time and held it.

Their success shows that you don’t have to day trade to reach your goals in crypto.

I have been in markets so long that when I started there was no such thing as a “day trader”. Traders were people like me who worked in dealing rooms or on exchange floors for big financial institutions. We had access to real time news and information, we saw order flows firsthand, and we executed trades immediately. In other words, we had massive advantages and nobody outside the market could replicate what we did.

Over time, though, with the internet improving access to information and trading capability for retail traders, the obvious gaps have narrowed, leading many people to believe that they can compete with the big boys from home. The facts, however, suggest that they cannot. There have been countless studies that tracked the profitability, or rather the lack of it, of day traders. They include one in Brazil that showed that 97% of people who trade for more than 300 consecutive days lose money and, in the US, an SEC study that found that 70% of foreign exchange traders lose money every quarter and that the average return on investment after 12 months is -100%.

Trading crypto is no different to trading stocks or forex in that regard. In fact, given the extremes of volatility seen in most crypto markets over the last few years, the situation there is probably worse, and your chances of success if you trade regularly are slim.

Why You Should Hold

That doesn’t mean, however, that you should be staying away from crypto. In some way, shape or form, digital currencies and blockchain technology look destined to be the future of finance, so a lot of money will be made by some people in the space. History shows that the greatest gains will accrue to those that hold for the long term, or hodl in crypto speak.

You don’t need to be a trader to hodl. You simply have to understand the long-term potential of crypto in general and of one or two individual cryptocurrencies or tokens, then buy them regularly with an amount that you can easily afford. Then you must be patient.

That process of buying in regularly is not a crypto thing; it is known as dollar cost averaging and is a technique that has been used by financial professionals and institutional traders since trading began. It is designed to smooth out volatility and build positions over time, and it removes the need for timing a market. If you buy now and what you bought heads lower, great, you get to buy some more at a discount next time. If it heads higher, great, you bought some at the bottom. Either way, you win!

Dollar cost averaging isn’t perfect, of course. If you buy all the way down on a sustained drop, you will be in at an average above the market and looking at a short-term loss. On the other hand, if you buy on the way up, you obviously would have been better off going all in on the first purchase. The thing is though, you do not and cannot know when you make the decision to buy something that you intend to hold over a period of years where the market will be a few months later. Averaging in takes the guess work out and enables you to get started so you can reap the long-term benefits.

Obviously potential returns matter when selecting something to hodl, but when you are looking at long-term holdings, so does safety. If you have some kind of hedge in place, then it is easier to ride the ups and downs and stay committed. The 100% buyback guarantee on qualifying purchases of SMTF offered by SmartFI is a great example of a hedge like that. If you know that the worst result is getting your money back any time after a year, then short-term market dynamics won’t force you to make a decision that gets in the way of your long-term plan.

If you are trying to generate money for a particular goal, which most people are, there has to be an end point to even a long-term investment. That may be based on time, say when you retire or when your kids go to college, or it may be based on the value of your portfolio, when you have enough to buy the house or car you wanted, or to pay for the vacation of a lifetime.

When you hodl, though, those are your only endpoints. You do not change your goal because an asset has gone up by a certain percentage. If you want to take a little profit on a big move up, fine. One of the first things I learned in my dealing room career was that you are never wrong to take some profit, but don’t sell out completely on that basis. You went in with a plan…stick to it.

Now Is A Good Time to Start

Just as there are studies that show that day trading has a very high failure rate, there are plenty that show that long-term holding has a very high success rate. There is no rolling twenty-year period in history when a simple stock index fund would have lost money for example, and even after the recent big drop in bitcoin (BTC), if you started dollar cost averaging in years ago, you are showing a good profit, with the chance of more to come. That drop in BTC has dragged other coins and cryptocurrencies down too so, from a long-term perspective, now is a good time to get involved.

So, if you see the long-term potential of crypto, not understanding trading could actually be an advantage. It means you won’t make a common mistake. Instead, you can learn about what’s on offer, plan a long-term strategy, and do what others have done successfully in the past, buy and hodl.