SIGN IN
SIGN UP
Current market price
Buy the token that funds small business loans
LEARN THE MOST SUCCESSFUL WAYS to make money with crypto
SMARTFI, THE OFFICIAL CRYPTOCURRENCY PLATFORM OF SUPERCROSS USA
$1 billion+ in loans and transactions
Newsroom
»
Education
»
What Is A DAO?

What Is A DAO? 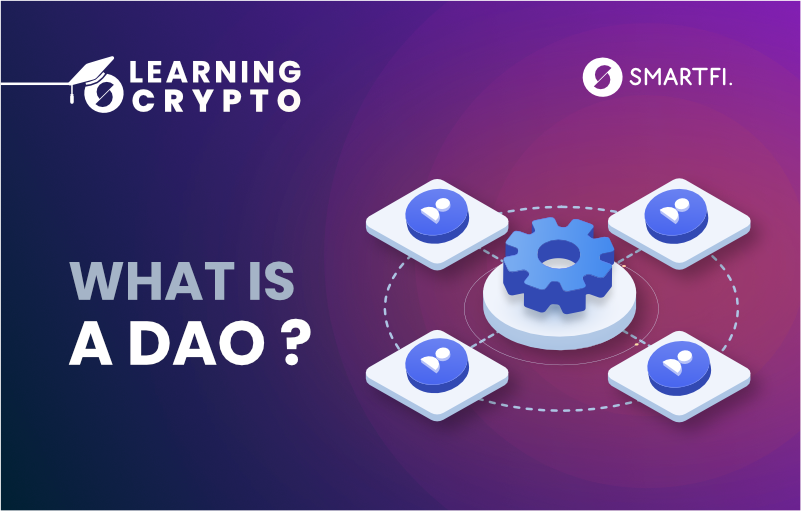 “What is a DAO?” is, on the surface, a simple question to answer. DAO is an acronym, and just saying what the letters stand for sort of answers the question.

So, a DAO is a decentralized autonomous organization.

You now know, if you didn’t before, what DAO stands for, but you are really none the wiser with regard to what DAOs are, or how they operate. To understand that we must first understand what each word in that phrase means in context and look at the implications of using all three words together.

“Decentralized” is an important word in crypto that most people with even a passing interest in the industry understand to some extent.

Our lives are based around centralized institutions, whether that be government or corporations. Even in a democracy or republic, we elect people to make centralized decisions for us, and corporations are run day to day by management teams and boards of directors, not the shareholders.

Crypto challenges that model in the sense that key decisions and even the day to day running of the communities is often done by the direct stakeholders, such as the owners of coins and tokens, or the miners. Decentralization is about democratizing control and is the model on which crypto was originally built.

“Autonomous” basically means self-governing, so it is to some extent an extension of “decentralized”. When you hand power to a community rather than a central authority, they become self-governing, almost by definition. In the context of a DAO, though, that has further significance. It means that they exist and operate outside a regulatory framework, or at least they have until quite recently.

At first glance the word “organization” may seem to be at odds with the concepts of decentralization and autonomy, but it doesn’t have to be. Organization does not necessarily imply centralization, even though it has come to be thought of in that way. It is quite possible for a group to become organized without subjecting themselves to centralized control. Not every organization needs a leader.

When people organize themselves into groups, it is almost always for their mutual benefit in some way, and DAOs are no exception. They are groups of people with the same interests, say the holders or miners of a cryptocurrency or token, who come together to protect and advance those interests.

So, DAOs are groups of people who have no central power controlling them, and who run their own affairs in an essentially democratic way. That sound ideal to many people, and certainly not threatening or dangerous, but when they exist within a centralized system of government there is a problem. Governments exist to govern, so usually feel that they should have the ability to control or regulate organizations that exist in their territory. And when those organizations make money, governments always feel that they should be able to tax them.

That is why there are moves around the world, but most noticeably in the US right now, to understand DAOs and give them some legal status. That could be both good and bad.

The good is that they would avoid being hounded by regulatory authorities, Those bodies, because there is no central power to punish for nonconformity or any perceived transgressions, have begun to say that every member of a crypto community structured as a DAO is liable should something go wrong, or potentially just for being organized that way.

The bad is that, once they are subject to regulation, they can no longer really be called autonomous, and lose an important part of their defining character. As disappointing as that is, though, giving that up in order to be allowed to exist may be a trade worth making. Compromise in never comfortable, but it is sometimes necessary.

The best compromises so far, that recognize DAOs but accept their uniqueness, are laws such as that being proposed in Utah, which make them a legal business structure. That makes them liable to taxation, but it also gives the member similar protections from liability to those enjoyed by other business owners or shareholders in public companies. From the point of view of a DAO purist, that is far from ideal, but in many ways, it is better than the alternative, and may ensure that before long, we all know what DAOs are.

Watch this video to learn more about DAOs