SIGN IN
SIGN UP
Current market price
Buy the token that funds small business loans
LEARN THE MOST SUCCESSFUL WAYS to make money with crypto
SMARTFI, THE OFFICIAL CRYPTOCURRENCY PLATFORM OF SUPERCROSS USA
$1 billion+ in loans and transactions
Newsroom
»
Blogs
»
Women In Crypto 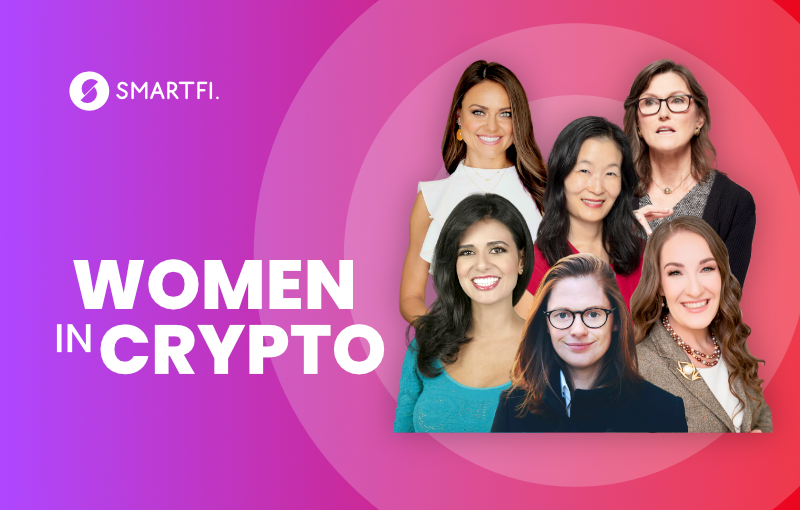 By way of its decentralized nature, crypto should be inherently inclusive. In the early days, however, the gender bias in the industry was noticeable. A Pew Research Center survey at the end of last year found that in the 18-29 age range only around 19% of women have any experience of crypto, versus 43% of men. In terms of workplace representation, the disparity is even greater, with women making up only around 5% of developers, investors, and executives in the crypto and blockchain industries.

If the industry is to keep growing and fulfill its potential, that has to change. Fortunately, there are some women who have, in the worlds of business and the media, become some of the accepted faces of crypto, and they are helping to move the industry towards a more balanced demographic.

Cathie Wood is best known as the brains behind the tech fund company ARK Investments, but she is also a recognized Bitcoin enthusiast. She famously predicted that Bitcoin would be trading at $1 million by 2030 and has been consistently bullish on crypto in general for many years.

Wood is known as a savvy and fearless investor and is a role model for  a lot of women who are interested in tech, so her embrace of the crypto and blockchain worlds is inspiring to many people.

Shin is a reporter and investigative journalist who was once a Senior Editor at Forbes. She hosts a crypto-focused podcast called “Unchained” that has hundreds of episodes available on Apple Podcasts, with an average review of 4.6 stars out of 5.

Shin doesn’t hesitate to be critical of the crypto world where she sees fit, but her obvious knowledge of and enthusiasm for the business encourages a lot of interest and interaction from women.

Natalie Brunell is another journalist and media personality who is fascinated by and knowledgeable about crypto. She brings a light, entertaining style to her podcast “Coin Stories” which regularly features industry leaders, but she isn’t afraid to tackle heavy subject matter when it comes to things such as innovation and regulation.

Brunell is known to many viewers of Fox News in the US, where she frequently appears as an expert on crypto. For women watching who may be interested in the subject, seeing a woman who is so clearly an expert goes a long way towards pushing them to get involved.

In 2014, Kathleen and her husband founded Tezos, which they built to the point of a $2.5 billion valuation by early 2022 following an Initial Coin Offering that raised over $230 million. Her experience before getting into crypto, with mainstream business entities like the Wall Stret Journal and Accenture, are an indication to women in business that their existing skills are transferrable, and that you don’t have to be a computer nerd to be successful in the crypto world.

Powers Gardner is the County Commissioner in Utah County and in that role, she has been a true pioneer in the government adoption of blockchain technology. She implemented blockchain solutions for both the registration of military voters overseas and for marriage licenses in her jurisdiction.

Her embracing of the technology is based on her belief that our data and records belong to us, not the government, and that the trustless, immutable nature of the blockchain ensures that that distinction is both understood and observed. Commissioner Powers Gardner gave a passionate and entertaining defense of that and explained what led to her interest in the blockchain on SmartFi’s Tilton Talks Crypto podcast recently, where she also talked about the relative lack of women in the space.

Danial brings crypto knowledge and enthusiasm to another area where women have been typically underrepresented but where they are increasingly influential, investing. She is the founder of Invest Diva, which specializes in personal finance advice for women.

Where Danial is different from others in that space is her enthusiastic embrace of crypto as an alternative asset class. She is an educator in that respect, and once again, seeing a female expert talk knowledgably on the subject sends a powerful message to women that crypto is something in which they can get involved.

There are many more women in the crypto world these days than there were just a few years ago, but the visibility and expertise of these six women makes them stand out as the kind of role models that are needed in the business. You cannot expect to achieve real, lasting success if you exclude over 50% of the world’s population, so if crypto is to move forward, these women and others in the industry should be supported by the whole community.