SIGN IN
SIGN UP
Current market price
Buy the token that funds small business loans
LEARN THE MOST SUCCESSFUL WAYS to make money with crypto
SMARTFI, THE OFFICIAL CRYPTOCURRENCY PLATFORM OF SUPERCROSS USA
$1 billion+ in loans and transactions
Newsroom
»
Education
»
What is a hedge?

What is a hedge? 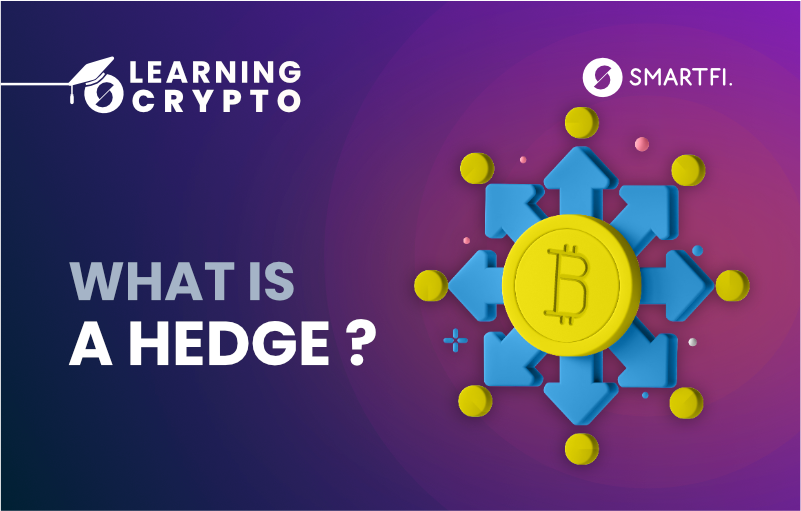 I have been in and around financial markets for forty years and, in that time, have become very familiar with the jargon that surrounds them. The problem that I sometimes have, though, is one that is common among market people…we get so used to using that jargon that we forget something that should be obvious: to most people it sounds like a foreign language. Even when trying to explain something, market people often throw around terms whose meaning we take for granted, and in doing so only confuse those that we are “helping”.

Over the years, I have come to the conclusion that that is no accident. Confusing jargon serves as a barrier to entry in highly paid professions and has the added advantage to the insiders of making those that use it sound smart to some people. Those things benefit traders, stockbrokers, and advisors in some ways, but they should have no place in an industry like crypto, an industry that was founded on the principle of giving financial power back to the people. And yet, jargon and unnecessarily confusing language is almost as prevalent in decentralized finance as it has always been in the centralized version.

Still, rather than pontificating on the subject as I have just done, the best way to address jargon and confusing concepts is to give as clear an explanation as possible of what those terms mean. That is what we try to do here.

So following on the posts answering questions like "What is Crypto?" and "What is a Blockchain?", we will attempt to explain the concept of hedging.

Hedging is not really a crypto thing, at least not originally. Rather, it is a trading term. Put simply, in that context a hedge is a trade taken to reduce the potential loss of another trade. It is a form of insurance, a way of reducing your exposure to risk.

The basic idea is to take a position that will benefit from conditions that will hurt your original trade. For example, if you own a couple of oil company stocks but there is an upcoming political speech on energy policy, you might want to invest a small amount in solar companies. If the speech is considered bad for one, it will be good for the other, so your potential loss is reduced either way. For traders, a hedge can often be much more complex than that, but you get the basic idea.

Most people, however, aren’t institutional or day traders, they are investors, and for them, hedging is often used to mitigate short-term risk to a long-term position. For example, if you have a stock portfolio in a retirement account with a time horizon of twenty years or so but are worried that the market is approaching a period of turbulence, taking out a hedge can be your best option.

You don’t want to sell everything because you might be wrong about what is coming, and even if you are right, you face the problem of when to buy back given that over time, stocks always go up. They always have, and always will. But, if you do nothing and the market does fall maybe twenty percent or whatever, you risk being squeezed out at the bottom, the worst possible scenario. If you take a position that will benefit from the drop, though, you can tell yourself that you saw it coming and did something about it, reducing the psychological pressure to make a really bad mistake.

So, you might buy something like the leveraged inverse S&P 500 ETF, SPXS. That fund is structured to move in the opposite direction to the index, with the percentage move multiplied by three. If you are right, and the S&P drops by 10%, say, then your SPXS position will show a profit of close to 30%. (It won’t be exactly 30% because the fund is reset daily and has fees that affect the return, but it will be close enough in most cases.) Thus, for a small initial outlay, you can “hedge” your portfolio, and reduce overall short-term losses on a market decline.

In the crypto world, hedging is an oft talked about concept, usually in terms of bitcoin or other cryptocurrencies being a hedge against inflation. Bitcoin has an inherently limited issuance; fiat currencies do not. The protocols that control bitcoin ensure there can only ever be a maximum of 21 million coins, whereas there is no limit to the numbers of dollars that can be issued or created. Because more dollars are printed every year, the value of each one falls inexorably. Every year, one dollar buys less, which is why a loaf of bread that might have cost your parents 25 cents now costs you $4. Conversely, because bitcoin issuance is limited, each one will, in theory and assuming some degree of adoption, be worth more with passing time. Something that costs 1 bitcoin now may only cost 0.1 bitcoin in the future.

That means that bitcoin acts as a store of value. Its purchasing power increases, rather than decreases over time. Thus, at times like this, with inflation running at over 8%, and therefore the value of a dollar kept in the bank falling by that amount per year, buying and holding bitcoin can protect you against inflation, or act as a hedge against it.

Even within the crypto ecosystem, though, you can hedge risk. In fact, given the volatility that we have seen in crypto to this point, an argument can be made that you should. There are several ways of doing that.

One would be to “dollar cost average” (* When the piece on this is posted, we can insert a link to it using the text “dollar cost average”) into your crypto holdings, buying a small amount at regular intervals rather than committing all of your investment in one lump sum. That smooths out the impact of volatility and makes market dips not just tolerable, but even welcome as they give you an opportunity to buy cheaply and improve your average cost.

Another might be to look for crypto tokens that won’t move in lockstep with BTC or ETH. Something Like SmartFi’s SMTF, for example. SMTF is a utility token whose value is underpinned by a loan portfolio. That doesn’t guarantee that it won’t move in the same direction as BTC or whatever, but it makes it possible that it won’t. Something like SMTF can therefore hedge your crypto portfolio by diversifying the influences that drive value, and ultimately therefore, price.

A hedge, then, was originally a trading concept and technique, but the word has passed into everyday usage. It is something that offsets or reduces risk and, given that identifying, managing and, where possible, reducing risk are the keys to success in trading and investing, it is something that everyone should consider.